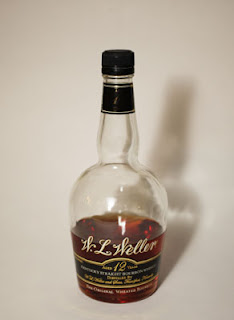 Earlier this summer, the LCBO offered a few interesting Buffalo Trace products as a direct order for customers online -- the E.H. Taylor Bourbon (which I believe was bottles from the 3rd distinct release of that specialty brand in recent years), Buffalo Trace White Dog (unaged whiskey from the still), and the W.L. Weller 12 Year. Old Weller Antique used to be one of my go-to value bourbons in Kentucky (along with Kentucky Tavern and Very Old Barton, depending on how much money I had at the time), and while that bourbon line is gone, the Weller 12yr and the Weller 107 proof are still around (for now).

What makes the Weller notable is that it is the "baby" version of the famed Pappy Van Winkle line. Julian Van Winkle serves as the master distiller for the Weller, Rip Van Winkle, and Pappy Van Winkle lines, and he uses recipes based off the old Stitzel-Weller recipes; most notably, all the aforementioned whiskeys are wheated bourbons (like Maker's Mark). The Van Winkle family were the master distillers at Stitzel-Weller; S-W is a legendary distillery among bourbon nerds, known for its wheated bourbons with rich, cognac-y flavours.

The Weller line tops off at the Buffalo Trace Antique Collection's William Larue Weller, which is released unfiltered at barrel-strength, often well above 120 proof (60%). Previously, the Weller name was used to distinguish between whiskey that contained mostly Buffalo Trace-distilled product (the Wellers) and whiskey that also contained product distilled elsewhere (the Van Winkle line, which contained some aging whiskey from Stitzel-Weller and other defunct distilleries). Nowadays, the stock of old Stitzel Weller has dried up (the last was distilled in the early 90s), so the younger bourbons in the Van Winkle line (the 12yo Lot B and the 15 year old) contain mostly Buffalo Trace product, making the lines extremely similar. To my taste buds, there isn't much appreciable difference between the W.L. Weller 12 year and the much-hyped Rip Van Winkle 10-year and Pappy 12 Year Lot B.

The nose isn't anything remarkable, but it is good. This whiskey sparkles -- when I hold it on my tongue, I can feel the grain interplay tingle my tastebuds. It's mouthfeel is thicker and oilier than Makers, but, as a wheater, it's taste is light and playful enough to drink almost incidentally. It's like a good Collins in whiskey form. Unlike other wheaters, the finish lingers just long enough without vanishing.


This is a GREAT (4 out of 5) whiskey. While I prefer the toughness of the 107 proof version, we don't get it up here, and the extra age adds a bit of complexity to the finish.

It is also a VERY GOOD value. While there are lots of good bourbon at this price range, and while we're paying almost $25 more than Kentucky prices for this bourbon, the uniqueness of the Van Winkle line and the huge markdown compared to the similar Van Winkle products make this an awesome value. Hopefully the LCBO leans on Buffalo Trace to make this bourbon a regular feature north of the border!
Posted by lucas at 13:42